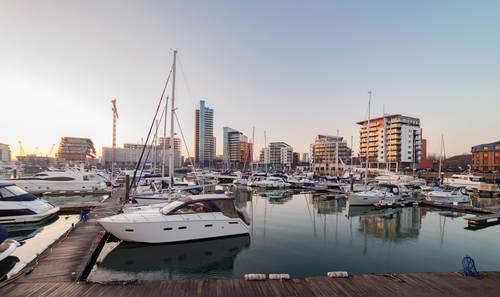 Located on the southern coast of England, Southampton has become famous for its industry as as well as being a grand tourist attraction. It has also been at the centre of some memorable moments in British history. Couriers will be glad that as a major town it has a great transport network comprising effective rail, road and air links. Here at Same Day Dispatch Services Ltd we provide our customers with the very best in delivery whether you are a residential or a business client. With that in mind let’s take a closer look at this attractive city and what you should expect from Southampton couriers.

Southampton – More Than A Port

If you live in Southampton you will be well aware it is nicely placed as a gateway to Europe on the English Channel. It is also blessed with two rivers. One river, the River Test, runs along the western border of the city while the River Itchen runs through the middle of the city. Amid all of this, the town has the unique benefit of a double high tide which means that large ships find it easier to get in and out of the port. The port is mentioned in writings that go back as far as King John in the 13th century.

Indeed, Southampton is famous for quite a few diverse historical events. For instance, it is claimed that the Black Death (which took place in 1348) reached England via merchant ships calling at Southampton. Henry V’s famous warship, Grace Dieu, was built at Southampton. The army which fought at the Battle of Agincourt in 1415, set off from Southampton.  The Pilgrim Fathers left to build the country we now call America in 1620. In 1912, the Titanic made its first and last voyage from this southern city. It is a sad fact that most of the Titanic’s staff came from Southampton. Consequently, 1 in 4 of the people who died was from the town.

Due to its perfect location both for Europe and the Empire, Southampton has been a primary port for military projects. In fact in the Second World War, the Spitfire was actually designed and developed in Southampton. For these same reasons, it attracted many German bombing raids – thousands of buildings were either damaged or destroyed and the city itself was effectively leveled.

The docks are important to Southampton and so for many centuries, they have become the main employer in the city. Tourism was a major industry in the 19th century and remains so today. In the inter-war years, it handled almost half of the UK passenger traffic. In the 21st century, the port is home to the tourism industry and commerce. As well as being safe harbour for luxury cruisers, it remains the largest freight port on the south coast.

It was during the latter half of the 20th century that more diverse industry came to the city: aircraft and car manufacture; electrical engineering products and petrochemicals. One of the largest industries in the city is the University Hospital Southampton NHS Foundation. Other major employers include the UK’s national mapping agency – Ordnance survey.

A Transport Network For Southampton Couriers

As well as great links for freight through waterways, the M27 links the south coast and the M3 offers easy access to London, Birmingham and the north. Freight services also use the rail network. Local train services operate in the city and are operated by South Western Railway. There is a regional airport at Eastleigh and of course, Gatwick and Heathrow are close too for longer flights.

Here at Same Day Dispatch Services Ltd we have access to the very best Southampton couriers for delivery across the UK or internationally.  We offer quality services and provide a host of delivery options to ensure your consignment reaches its destination safely and at the time you desire. To get an idea of our charges, click here for an estimate. We look forward to hearing from you!

This entry was posted on Wednesday, August 4th, 2021 at 7:41 am and is filed under Courier Services, International courier service, Parcel Delivery, Same day courier services, Supply Chain. You can follow any responses to this entry through the RSS 2.0 feed. You can leave a response, or trackback from your own site.